With Pieter-Dirk Uys as ‘Madame Bambi Kellermann’ and Godfrey Johnson at the piano.

Bambi Kellermann (born Baby Poggenpoel) is the younger sister of Mrs Evita Bezuidenhout. Chalk and cheese. Whereas Evita has become a household name and favourite across political-party lines, Bambi smoulders in the background – not yet as famous as her sister, but far more dangerous. She left Bethlehem in South Africa’s Orange Free State in 1956 and went to Europe where she eventually married Joachim von Kellermann, a notorious Nazi survivor of the Second World War.

Bambi is back in the democratic South Africa. She runs a wine-tasting cellar in Paarl, sometimes referred to as nothing more than an excuse for a high-class brothel. She is HIV positive and haunted by terrible memories.

She sings – inspired to sing by many who also could not sing, but became famous for their singing: Marlene Dietrich, Hildgarde Knef and Zarah Leander to name the German ones. She loves the music of Kurt Weill and Stephen Sondheim. And being an Afrikaner meisie at heart, finds any excuse to sing her favourite Boere Liedjies out of the FAK Sangbundel. But with a sinister twist.

This is what the Kabaret is about: her extraordinary story of survival told in song, her background echoed in familiar tunes, her inspirations gently mocked through canny impersonation. With Pieter-Dirk Uys as Bambi and with music arranged and played by Godfrey Johnson, the cabaret is performed in three languages. Bambi’s story is told in English, while the songs also include some in German and some in Afrikaans. This cabaret is not for the faint-hearted. It unites the acrid stench of the old Weimar Republic of the 1930s and the sexy rot of Hamburg’s Reperbahn with the familiar aromas associated with  ‘ons eie’ Voortrekker-camps and braaivleis-orgies.

Come for a pizza and a beer or a glass of wine  at Chalkboard (right next door to POPArt ) around 6.45pm.  The show begins at 8pm. 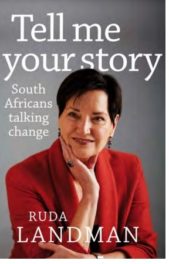 Tell me your story – Ruda Landman