We are delighted to invite you to an evening with Jeremy Thompson,broadcaster extraordinaire. David O’Sullivan (ex -702 and now Kaya FM) will be in conversation with him and as you all know David is a consummate newshound and a fantastic interviewer.

Jeremy Thompson is one of the best-known and longest-serving journalists and news anchors in the UK. Thompson worked for all the major news broadcasters in the UK: the BBC, ITV and finally Sky, where he started as a foreign correspondent in 1993. He ran the foreign bureau in Asia, Africa and the USA, covering many of the most important news events of our time and reporting from all over the world, picking up countless awards for his work. During four years based in South Africa he covered the momentous events that saw the end of apartheid and the election of Nelson Mandela, a man he got to know well. His reports from across Africa covered the genocide in Rwanda, as well as wars in Somalia, Sudan, Sierra Leone, Angola and Mozambique.

The first TV journalist to broadcast live as British peacekeeping forces arrived in Kosovo, he also covered the first Gulf War and, in 2003, anchored Sky News’ coverage of the second Gulf War from inside Iraq. He presented every night for a month on the front line and was the first anchor to present from post-Saddam Baghdad. Thompson was back in South Africa to cover the death of Nelson Mandela and the murder trial of Oscar Pistorius.

This extraordinary book tells the life story of one of the nation’s most popular broadcasters. 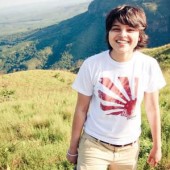 HITLER, VERWOERD, MANDELA AND ME BY MARIANNE THAMM, a memoir of sorts